The Economics of Aesthetics

Medical aesthetics is booming, and the economics of aesthetics has been the subject of a number of market reports over the course of the last few years. According to leading market research group Markets and Markets, the industry is set to be worth $12.5 billion by the year 2020 and the reasons behind such growth are fascinating when you dig down to a granular level.

Botulinum toxin,  although known to science since the year 1820 wasn’t recognized as a treatment to fight the signs of skin ageing until 1989, when the Californian scientists Clark and Berris treated facial asymmetry by injecting botox into frontal face muscles. It’s been estimated that global demand for botox products, driven by increasing desire for facial cosmetic treatments will reach $2.9 billion by 2018, astonishing growth for a treatment which was first recognised as an ally to combat the signs of skin ageing just 27 years ago. Botox products are estimated to grow to be worth 61% of a global facial aesthetics market worth $4.7 billion in in 2018, with the United States accounting for 49% of demand.

In the years ahead the greatest growth is expected from Asian markets with rapid increases in demand linked to China and India, although other countries such as South Korea, Malaysia and Vietnam can also be held to account for the rapid growth. Increasing employment opportunities for people in South Asian countries is leading to higher disposable incomes, driving demand for aesthetic procedures. Market research has shown a shift in demand from invasive, to minimally invasive and non invasive cosmetic procedures further driving the increase in numbers of facial treatments of which botox injections can be considered part of. In 2014 it was estimated that non-invasive procedures accounted for 84% of all medical aesthetic treatments performed. Non-invasive treatments are often fast, easy to administer and relatively painless making them a safe option for patients who perhaps have limited experience in aesthetics and are looking to take their first steps.

When considering recent surges in demand, it’s hard to ignore the impact of influencers and the media. Once a taboo subject, increasing numbers of celebrities and figures who command a strong media following are admitting to the use of facial aesthetic treatments, revelations which in turn make the use of facial aesthetics more socially acceptable. Kylie Jenner’s admission to the use of lip fillers resulted in a 70% increase in treatment enquiries, with the number of times “lip fillers” were searched for as keyword on Google more than doubling in the immediate aftermath.

Growth in botox treatments can also be linked to its non-permanent nature. With a single course of treatment lasting on average around three months, patients must return multiple times a year to maintain results. As a result, taking on a new patient rarely results in just one treatment a year, and just one patient having just one type of treatment a year (eg botox or fillers) can provide multiple sources of revenue. 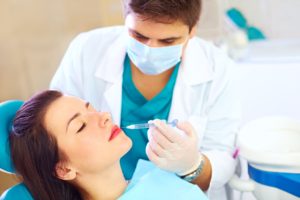 However, for an industry on a trajectory as lofty as it currently is, facial aesthetics isn’t without it’s threats. The industry is vulnerable to market volatility, and as a luxury, elective treatment, demand can suffer as a result of economic uncertainty. Demand for treatments saw a fall during the global economic downturn, but not as much as you might think. Global sales of Allergan’s Botox held relatively steady during the 2008-2009 recession, falling by just 2%. But it’s important to understand that the industry remains vulnerable to future fluctuations in the global market, especially as South Asian economies grow in strength.

So why should we care about aesthetics’ global outlook? Only by developing a deep understanding of your target market can you make effective decisions to drive your business forward. If you’re running your own clinic, how to, and when to market your business is vital in attracting new patients. Stronger industry knowledge can lead to smarter and more efficient business decisions,

Aesthetic practitioners with ambitions to run clinics overseas may already be looking to expand into South Asian markets, and it’s certainly worth noting the link between demand for treatments and disposable income, which is significant in almost all markets across the globe. Being able to manage and address the concerns of patients who are exposed to

On a national level, it’ll be fascinating to see how demand for aesthetic treatments, and the fortunes of established practitioners change, or indeed resist change post Brexit. Whilst the aesthetics industry isn’t likely to be affected as much as some, there will still be a need for either those industry or patient side to absorb some of the costs, but it’ll take until the exit process has truly begun for us to measure the true effects.

For more information about careers in aesthetic medicine, and how to get involved in the industry please click here.

Details on Harley Academy’s training courses can be found on our dedicated page, and for details on how to get in touch with us please head to our contact page.

About Us
Articles
Sitemap
FAQs
Careers